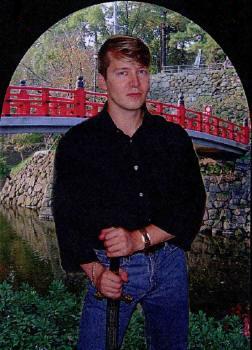 “I found, as in a rite of passage, that a shimmering, glistening, living morality awaited me.”

In his flagship work, Moral Armor, Ronald E. Springer developed a world’s first: a moral code based on nature itself. Ron has brought moral clarity to his audience by showing how our thought pattern follows the flow of nature exactly. “If you’re aware of this natural pattern, you’ll be back in the drivers seat regarding morality”, says Springer. “With an organic code of ethics, everyone can walk through the world withcomplete moral certainty. We can enjoy a deeper mutual respect than we’ve ever had, and steamroll through life with no moral hesitation.” With trouble brewing around the world, Ron is aiming to diffuse our society’s moral differences so America has the resolve to weather any storm. Regardless of your moral background, Springer’s pattern of life applies to you.

In his own words: “This work began jovially, but a serious detour was near, which changed the face of it entirely. It’s an old story; born poor, I was rewarded with bounty for my successful efforts in life, but penalized in any desire for acknowledgement. As my knowledge and ability grew, so did my distance to others; not by my choice, but by theirs. I could not understand their discontent, and little by little, I lost everyone. Heartbroken, I didn’t know what I was doing wrong. I worked so hard; wasn’t I good enough? It was incomprehensible to me that others could be responding with hatred toward the things I did right. Locked in social dysfunction, I stepped out. Eventually, the devastation of a desperately important relationship revealed the fundamental truth; I finally understood what they were doing. With ten years of philosophical ammunition, I was able to name instance by instance, the purpose behind the trauma such evil had caused over the years. Well-armed, I entered their world to document their horrors, but I was caught; it was a trap. With my dreams destroyed and my potency shattered—mauled by the one closest to me—my purpose in life was forever altered. In my last breath, I sought redemption with one word: “No!”

When I resurfaced, I had brought something dark and powerful back within me. The joviality became spiritual self-defense. The innocent smile became a steady, predatory trance—a confidence beyond theirs. I saw how evil was extrapolated across the entire range of human action, and more important, how to fight it. Throughout history to this day, no horrors can compare to what the evil have done to our best. As a philosophy and a personal identity, Moral Armor was brought to life to avenge the purest in Man.

I did not anticipate the means being so personal, nor the end to be so crucial. Many people do grasp the link between their intellectual coherency and their quality of life, yet traveling their roads of achievement, have suffered the same torture as I. Those who’s every action generates life must learn to fight back and gain the moral recognition they deserve. It is time to acquire the sunlit gratification our civil productivity spawns, and which the whole world owes us.”

Ronald E. Springer has spent over ten years sifting and compiling the philosophical and psychological data necessary to develop a fully integrated moral code for Man.  Besides Bachelor’s and Master’s degrees, twenty thousand hours went to create Moral Armor–the equivalent of about two PhD’s–tailored for the direct, practical use of sound moral premises in everyday life.

Ron has been a guest on The Mitch Albom Show, FOX News and NBC Radio affiliates, including enjoyable interviews with clergymen. Straight-forward yet profound, Ron brings humor and lightheartedness to the audience; just what philosophy has been missing. And controversial? “Always a possibility,” says Ron. “An Organic Morality is as controversial as truth is to a liar.” The audience will hear the results of this philosophy in his passion for it.

Outside of Philosophy, Ron has a background in Real Estate, the Stock Market, and Automotive Design. He spends most of his time pouring over manuscripts in economics, history, philosophy and psychology, looking to bring new clarity and new armor to the historical challenges of modern Man.